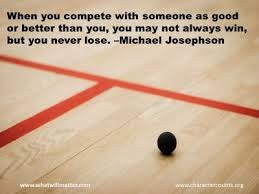 We all do it on some level. Even when we say we don’t, we do. You might be subtle about it or you might deny that you have the “competition gene” but you do.

As humans we are programmed for competition. But the further we move away from our primitive heritage the less appealing competition is to our sensibilities. Cooperation seems better suited to our modern world.

Yet we pay athletes obscene amounts of money to compete. We sit for hours watching other people compete at games we played as children. We create games our children play that mimic the games we watch other people play. Competition is in our blood.

Don’t misunderstand me. If I am in a contest I want to win. I like winning. But I don’t compete to win. I compete to improve, to affirm my human-ness, to know I am better.

I compete for myself. If it is a contest between us I want to win. But when it is over I will also win if I am better. Competing is a no lose proposition.

Ellie McKenzie December 1, 2022
Schedule Your free intro
Talk with a coach about your goals, get the plan to achieve them.
Start Now